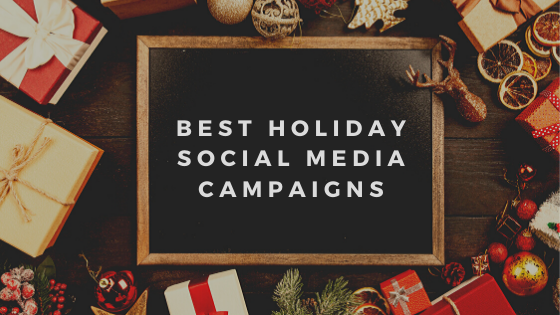 If you haven’t already started to think about your holiday marketing strategy for your business, there is no time like the present to get dreaming. The holidays offer a unique opportunity for social media marketers and businesses to capitalize on the consumer’s expectation for promotions and the consumer’s increased time online (thanks to vacation and constant posting of holiday photos). 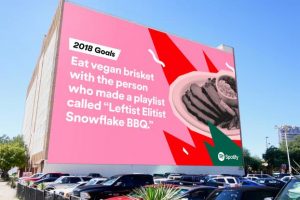 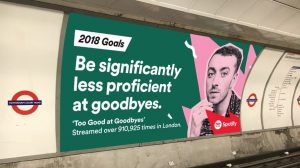 We love @spotify. It serves as the soundtrack to our lives and honestly, we didn’t even understand how HUGE of a company they were until this campaign went viral in 2017. 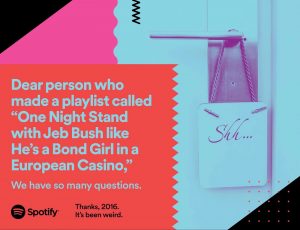 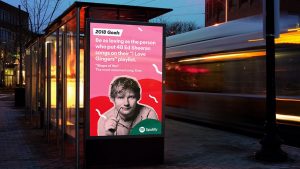 Campaign Synopsis: Spotify took to the streets, posting many of its customers playlists with the funniest titles alongside with messages to accompany those playlists to intrigue passersby to stop and look. The campaign took users data (which was seen as risky) and pushed it through 18 global markets (localized in each) and displayed in real life in places like subway stations and on billboards but also posted online to encourage users to try and devise their own epic playlists and quirky titles.

The result? Their target audience expanded far beyond millennials and this campaign (made entirely by Spotify staffers, no outsourcing happened here folks) added an image of humour and personality to a relatively unknown brand. Their revenue tripled in the first quarter of 2018! 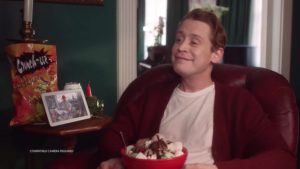 Let’s admit it, we have all been a little bit creeped out by our Google Home haven’t we? This 2018 campaign grabbed its target demographic by the heartstrings with a campaign that involved their favourite childhood movie and took the fear out of Google Home by replacing it with fun and framing it as a friend!

Campaign Synopsis: The campaign took the best scenes from Home Alone and hired the real grown up Macaulay Culkin, now 28 instead of 8, to redo the traditional scenes from the movie but with a Google Home Assistant to accompany him! Kevin orders his pizza, but this time, gets Google Home to reply to to the pizza delivery person with the famous line “Keep the change you filthy animal”. He asks Google Home to tell him his calendar for the day, to set reminders and to help him fight off the burglars. It really demonstrates how integrating nostalgia into your holiday campaign can attract your viewers and challenges the current status quo of “social media influencer” marketing we see all too often today.

This is the best example of a campaign that keeps on giving. The New Zealand Post was able to take a common concept used around the holiday seasons, make is ever more meaningful in a digitally isolated era, and garner so much support that even their Prime Minister took part of the game one year. While its popularity has decreased over the years, the Twitter account is still active and some players still engage on this campaign.

Campaign Synopsis: The campaign actually began way back in 2010 and set out to take the old Secret Santa game (where everyone buys and gets a gift, without knowing their gift giver), and scale it to the national level. They wanted to make Secret Santa bigger and better. The campaign launched on Twitter as @nzsecretsanta and invited everyone interested in playing to to register online, imagine up a suitable gift for their giftee, and then each gift would be delivered by the New Zealand Post anonymously. Over 2000 people posted their gifts online, used the hashtag, and thus promoted the New Zealand Post while still being able to enjoy the act of giving and receiving gifts on Christmas.

Are you ready to share your creative magic with your followers this holiday season? We hope so. If you still need some help, check back next week for our how-to guide on making a holiday campaign that blows people away. Happy Holidays from the Team at Skyfall Blue.

Converting Your Business Into a Successful Meta Business Suite!

5 Tips To Boost Your Creativity In A Marketing Campaign
November 14, 2022

5 Tips To Boost Your Creativity In A Marketing Campaign

The 8 Best WordPress Plugins to Use for Your Website
November 9, 2022

The 8 Best WordPress Plugins to Use for Your Website